People love sports – they have been around for millennia; some play them professionally, some play to improve their health, and some people just like watching them and betting with the Unibet bonus code. Every sport is significant to its players and fans. Playing petanque also means following a specific set of rules. If you want to be a good and consistent player then you have to mind some Ps and Qs that go along with the shooting style. The most important one of them is positioning your body in the correct way.

Why is it so Important?

Like in any sport, the position of your body will greatly affect your shot. But most importantly, it will help with the accuracy of the shot. If one does not align their bodies correctly they will end up compensating for the incorrect positioning of the body causing them to either miss or become used to playing with an off-centered body.

There are examples of people being able to paly even with bad positioning. But this should not become a habit as the players who get used to this are not going to go far. Even though they still play well with their bodies twisted up they will lack consistency in the long run which will ruin their chances to get really good.

The correct way to start is to step in and firmly position your feet inside a circle. Next comes centering your body and preparing for the shot. Players should stand up with their backs straight and then breathe steadily while they concentrate on the target. Spreading your shoulders and arms helps when one is trying to get a sense of the space around them.

The torso needs to be position in a perpendicular line with the target.

Not being able to do all of this will result in you most likely missing the target. Even though some players use the pivot foot forward stance with the shooting shoulder being slightly ahead of the other, it might boast well for one’s shooting style. But still, in the long run, it might not work well for a good career in petanque.

How to Address the Issue?

Determining a good position in petanque should be your prime priority. If you are really into this sport than doing the best you can to improve your shooting style should be a must. Try practicing and make sure that you assume the correct position each time when making a shot. Also, take advice from experienced players if they notice that you are positioning your body in the wrong way.

Not being able to address this issue in time will cause a lot of trouble for your career. Also not fixing it on time will make it much harder to rearrange afterward. When one is used to one way of doing it there is no telling how much time it would take to correct. Better start doing things the right way as early as possible. 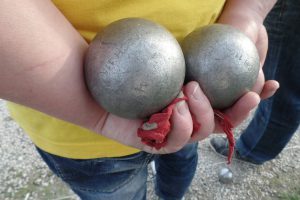 How to Choose the Right Ball for Petanque? 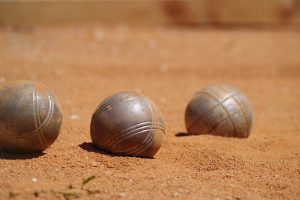 The Beginnings of Petanque